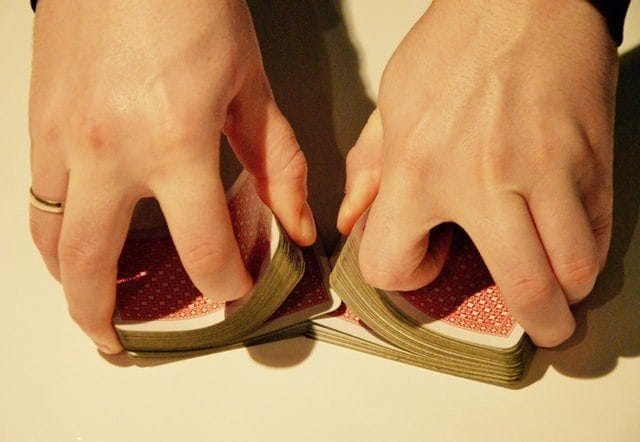 Before you start, place a joker on the bottom of the deck. That it.

Have your helper select a card and replace it back on top of the deck. Now have them cut the deck in half 3 or 4 times. What happens is that the cutting doesn’t really mix up the cards. Their card will be next to (on the right) of the joker if you were to spread the cards face up.

Say to your audience, "did you know that a deck up cards is very similar to our calendar?" (Spread through the cards face up towards yourself so no one can see the faces, and cut the cards in half bringing the joker to the top of the deck. This automatically brings their card second to the top.)

Spread the cards again in your hands, this time showing a few of the faces, and say... "We have four seasons in the year, just like four suits in a deck of cards. In fact if you add up all the numbers of every card in the deck, with the ace being one, then two, three, four etc. and the jack 11, queen 12, king, 13, the total will be 364. Add the joker and we have 365, the same number of days in a year. Weird isn’t it?"

Turn the cards over so that they are face down. (The selected card should be second from the top.)

"But we’re just getting started..."

"There are 12 months in a year." This time count 12 cards on the table. Pick that group up and place it on top of the deck.

"There are 7 days in a week." Count seven cards on the table. Put those cards on top the deck.

"What is your card?" Turn over the top card and amaze your audience because the selected card is now on top!

This is a mathematical based routine and works every time as long as you count correctly. The story about the calendar, numbers and cards are true, so your audience will learn sometime as well as be amazed!

Enjoy and have fun!